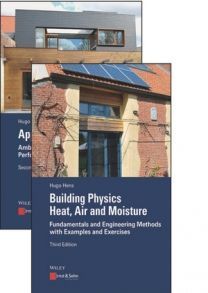 In the introductory chapter, first a description is given of the engineering field called ‘Building Physics”. Then follow the constraints, with comfort, health and well-being, architectural design and materials used, economics and sustainability as most important ones. Next, the importance of building physics as a necessary tool to come to high performance buildings fit for purpose is underlined, after which its history as engineering field is recapitulated.

The first chapter on heat transfer starts with what heat and temperature is, included the definition of heat flow and flux. Follows heat transfer by conduction in steady and transient state through flat, two-l and three-dimensional assembles with the thermal resistance and the harmonic properties of flat assemblies as usable quantities. After, the scope moves to the heat exchange at surfaces with convection, fixing the convective surface film coefficient, and radiation, translated into a radiant surface film coefficient, as players. Practice starts with the surface film coefficients in- and outside and related reference temperatures. Then come the thermal transmittance of single and compositions of wall assemblies, the thermal resistance of cavities, temperature profiles, thermal bridges, the thermal and solar transmittance of glazing and windows, the mean thermal transmittance of envelopes, the harmonic properties ambient to ambient and temperature dampening in indoor spaces.

The second chapter on mass transfer starts with a bunch of necessary definitions, a look to all possible moisture sources and the problems they cause. Follows air as first mass component, with its transfer in and across assemblies and the impact it has on heat transfer as main elements. Then comes water vapour as second component, with its presence in air and open-porous materials, its movement by diffusion and the fast transport related to air displacement as subjects. Important for practice are phenomena such as mould, surface and interstitial condensation, the last by vapour diffusion and egress of air loaded with water vapour. The third component discussed is liquid water and its transport by capillarity, gravity and pressure differences in building assemblies. Important for practice and directly related to the three driving forces are rising damp, rain absorption and seepage, drying of wet assemblies and ultimate wetting in case of long-lasting interstitial condensation.

The third chapter brings things still closer to reality. Heat and moisture transfer are like Siamese twins, they are truly interconnected. Based on conservation of mass and energy, related theory on combined heat, air and moisture transport is first explored in detail, after which application at the wall assembly and whole building level is explored, among others by simplifying the partial differential equations with variable coefficients that govern the combined transport. One of the approximations used is the sorption-active thickness of a flat assembly. All ends with a post-script that makes the link to a performance-based building design and execution.