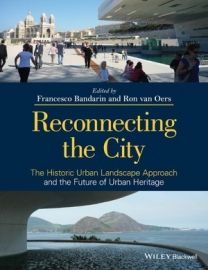 The Historic Urban Landscape Approach and the Future of Urban Heritage

Francesco Bandarin was UNESCO's Assistant Director-General for Culture from 2010 to 2014 and is now Professor of Urban Planning at the University Institute of Architecture of Venice. He was formerly Director of the UNESCO World Heritage Centre and the Secretary of the World Heritage Committee. He is trained as an Architect (Venice 1975) and Urban Planner (UC Berkeley 1977) and has pursued an academic career as Professor of Urban Planning at the University of Venice (IUAV) and a professional career as consultant for international organizations in the field of urban conservation and development. He has been actively involved in the Venice Safeguarding Project and in the preparation of Rome for the year 2000 Jubilee. As Director of the World Heritage Centre he has promoted the revision of the UNESCO recommendations on historic cities and has contributed to development of the debate on the role of contemporary architecture in historic cities, on the management of their social and physical changes and on the role of communities in the conservation of historic values.

Ron van Oers is Vice Director, World Heritage Institute of Training and Research for Asia and the Pacific (WHITRAP). He was formerly Programme Specialist for Culture at the UNESCO World Heritage Centre, coordinating the World Heritage Cities Programme and the international effort to develop new guidelines for urban conservation, which were adopted as the 2011 Recommendation on the Historic Urban Landscape. He is trained as an Urban Planner (Delft 1993) and received his doctorate (PhD, Delft 2000) on a research into the principles of Dutch colonial town planning (published as book). He is the Founding Editor (together with Dr. Ana Pereira-Roders) of the Journal of Cultural Heritage Management and Sustainable Development (JCHMSD), published by Emerald Group Publishing (UK) and a Member of the Editorial Advisory Board of Change Over Time: International Journal of Conservation and the Built Environment, published by Penn Press, University of Pennsylvania's School of Design (USA).