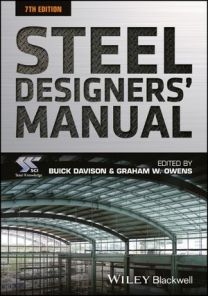 In 2010 the then current European national standards for buildingand construction were replaced by the EN Eurocodes, a set ofpan-European model building codes developed by the EuropeanCommittee for Standardization. The Eurocodes are a series of 10European Standards (EN 1990 - EN 1999) that provide a commonapproach for the design of buildings, other civil engineering worksand construction products. The design standards embodied in theseEurocodes will be used for all European public works and are set tobecome the de-facto standard for the private sector in Europe, withprobable adoption in many other countries.

This classic manual on structural steelwork design was firstpublished in 1955, since when it has sold many tens of thousands ofcopies worldwide. For the seventh edition of the SteelDesigners' Manual all chapters have been comprehensivelyreviewed, revised to ensure they reflect current approaches andbest practice, and brought in to compliance with EN 1993: Design ofSteel Structures (the so-called Eurocode 3).