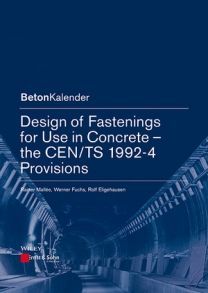 The European pre-standard CEN/TS 1992-4 for the design of fastenings by means of headed studs, anchor channels as well as post-installed mechanical and chemical anchors is ready for use. The background and interpretation of the provisions related to the determination of actions and resistances based on limit state design, durability, fire resistance, fatigue and earthquake actions as required by CEN/TS 1992 are described in detail.

Selected chapters from the German concrete yearbook are now being published in the new English "Beton-Kalender Series" for the benefit of an international audience.

Since it was founded in 1906, the Ernst & Sohn "Beton-Kalender" has been supporting developments in reinforced and prestressed concrete. The aim was to publish a yearbook to reflect progress in "ferro-concrete" structures until - as the book's first editor, Fritz von Emperger (1862-1942), expressed it - the "tempestuous development" in this form of construction came to an end. However, the "Beton-Kalender" quickly became the chosen work of reference for civil and structural engineers, and apart from the years 1945-1950 has been published annually ever since.