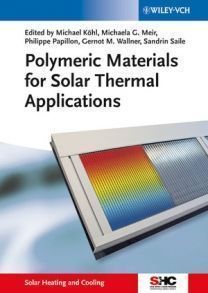 In this first book devoted to the topic, Part One explains the basics for those in the plastics industry, while Part Two introduces solar thermal experts to polymers. Part Three combines both fields, discussing demands on durability, design and building integration.

Dr.-Ing. Michael Köhl, physicist, has been actively involved in the field of solar energy conversion since 1977. He presently works on service-life analysis of solar collectors and photovoltaic modules in the department Weathering and Reliability at Fraunhofer ISE. He was the coordinator

of the EU projects SUNFACE and SOLABS and leader of Subtask 5 of the IP PERFORMANCE. In 2011, he broadened this range with the EU project SCOOP. Dr. Köhl is the current Operating Agent of the Task 39 "Polymeric Materials for Solar Thermal Applications" of the Solar Heating and Cooling Programme of the International Energy Agency IE.

Dr. scient. Michaela Meir, physicist, has been working with R&D on solar thermal and energy systems for more than 15 years, with particular focus on the development of solar collectors using polymeric materials. She is presently employed part-time by the University of Oslo and by Aventa AS. She is Chairman of the Norwegian Solar Energy Society board and leader of Subtask A "Information" of IEA SHC Task 39.

Sandrin Saile, M.A. received her M.A. in British and North American Cultural Studies from the University of Freiburg. She joined the Fraunhofer ISE's department "Weathering and Reliability". in 2009 where she is responsible for the management and dissemination of the department's solar thermal activities, in particular the projects SCOOP and SpeedColl. Within IEA SHC Task 39 she is mainly active in Subtask A "Information" and played an active role in establishing the Solar Heating and Cooling Series.

Prof. Dr. mont. Gernot M. Wallner, graduated with a "Diplomingenieur'' degree in Polymer Engineering and Science at the University of Leoben (Austria) in 1994, and he obtained a PhD degree in the same field at the University of Leoben in 2000. In 2008 Prof. Wallner obtained a Venia Docendi in the field of "Functional Polymeric Materials'' with special focus on solar energy applications. Since 2010, Prof. Wallner has been Deputy Head at the Institute of Polymeric Materials and Testing (IPMT) at the Johannes Kepler University Linz (JKU, Austria). Prof.Wallner is a member and leading person in several solar related working groups and committees. Since the establishment of IEA SHC Task 39 in 2006, he has been leader of the Subtask C "Materials".

Dr.-Ing. Philippe Papillon has been a senior expert in the field of solar thermal energy at INES (Institut National de l'Energie Solaire - CEA) since December 2005.He has been active in the field of thermal solar energy for more than 20 years, and has experience as coordinator as well as WP leader in European projects and also large national research projects. Beyond his research activities within INES, he is also an expert in European and French standardization committees, and is a member of the European Technology Platform on Renewable Heating and Cooling board. From 2006-2010 he acted as leader of the IEA SHC Task 39 Subtask B "Collectors".

Structural Concrete, the official journal of the fib, provides conceptual and procedural guidance in the field of concrete construction, and features peer-reviewed papers, keynote research and industry news covering all aspects of the design, construction, performance in service and demolition of concrete structures.