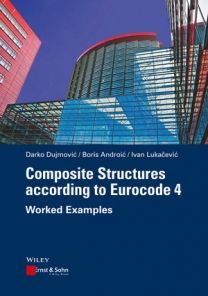 Composite Structures according to Eurocode 4

The authors all have academic posts at the University of Zagreb, Croatia, and Prof. Androic also works in the industrial sector, being the director of IA Projektiranje Structural Engineering Ltd.

This 924-page hardback consists almost entirely of well-presented design calculations to EN 1994-1-1 (Eurocode 4), with occasional use of Eurocodes 2 and 3. There are brief comments on fire resistance. The text and diagrams are clear, with sufficient crossreference to clause numbers in the codes and few errors.

The first subject is creep and shrinkage (5% of the book), subjects repeated in all the examples on composite members: beams (40%), columns (31%), slabs (18%) and fatigue (6%). The members are almost all for buildings, with simple distributed loadings.

There is a 16-page list of the section headings of the 24 worked examples, with drawings of each structure; so good that no index is needed. Each example is almost selfcontained, with the basic processes, such as calculation of loads and properties of crosssections, repeated in each one. The text is so detailed and spaced out that even calculations of the effective ange widths of a beam can take several pages. There are ‘remarks’, often on the outcome of a calculation, but rarely on the background to the rules used.

The book is not a designers’ handbook or a textbook. Eurocode symbols are used and well defined, but centimetre units (non-SI units) often appear; e.g. flexural stiffness (EI) in units of kNcm2. There is no reference to national annexes, as Eurocode ‘recommended’ values are used, except in one example: the proprietary system ‘Hoesch Additive Floor’, which is based on German practice. Where Eurocodes give alternative methods, both are used, sometimes to show that the longer one is best avoided. Calculations are presented in continental style; an example is 2∙4,91∙15,52 which would in the UK be 2 × 4.91 × 15.52. ‘Difficult’ subjects that are well presented include distortional and torsional buckling of beams, partial shear connection, secondary effects of shrinkage, propped and un-propped construction, and use of longitudinal reinforcement in troughs of sheeting. The calculation of second-order shear forces in pin-ended columns was new to this reviewer. One of the two examples on fatigue checks the shear connectors in a beam for a few million passages of a 35kN axle load from a fork-lift truck across the floor that the beam supports. The ability of the floor, a 130mm composite slab, to survive this loading is questionable, but is not checked. This omission is untypical, because the checks important for each structure are usually included. Coverage of fatigue is limited; its other example, a bridge deck, consists mainly of checks on the steelwork using Eurocode 3.

The book will be useful to young engineers who have just started using Eurocodes for steel or concrete structures. For those with more experience, there is too much elementary material and insufficient coverage of frames, bridges and more complex aspects of the subject. Joints are covered only by a set of drawings, without analysis or calculation. A more concise style would have left space for examples on cross-sections in slenderness classes 3 and 4, columns not assumed to be pin-ended, framed structures, the resistance of studs in troughs of sheeting, precast floor or deck slabs, and concentrated or moving loads on slabs.

Roger P. Johnson; Professor of Civil Engineering at the University of Warwick