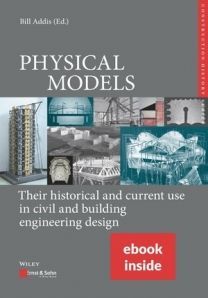 The book traces the use of physical models by engineering designers from the 18th century, through their heyday in the 1950s-1970s, to their current use alongside computer models. It argues that they have been as important in the development of engineering as scientific theory.

Bill Addis, born in 1949, studied engineering sciences and philosophy at the University of Cambridge before working as an engineer in the aerospace industry. He later spent over 15 years in the Department of Construction Management at the University of Reading, and then 15 years as a consulting engineering with the firm Buro Happold in London. He developed his interest in building and civil engineering history, and in the use of model testing during five decades, including work on his doctorate on the history and philosophy of engineering. He has written several books and over a hundred academic papers on the history of building engineering and construction, and has recently been enjoying lecturing and research as a visiting professor in universities in Rome, Innsbruck, San Sebastian, Zurich, Brussels and Munich.