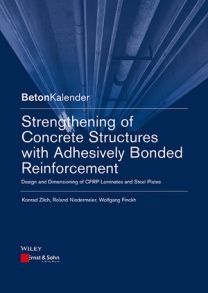 Design and Dimensioning of CFRP Laminates and Steel Plates

The design and use of externally bonded CFRP strips, CF sheets and steel plates according to the German DAfStb guideline, which supplements the Eurocode. With design examples covering fatigue, creep, serviceability and ultimate limit state analysis for slabs, beams and columns.

Prof. em. Dr.-Ing. habil. Dr.-Ing. E. h. Konrad Zilch studied civil engineering and gained his doctorate at TU Darmstadt in 1976. Following research posts at the University of California, Berkley, and the University of Western Ontario, Canada, he worked in the construction industry for many years. From 1988 to 1993 he was professor for structural analysis at RWTH Aachen University, and from 1993 to 2009 professor for concrete structures at TU Munich.

PD Dr.-Ing. habil. Roland Niedermeier studied civil engineering and gained his doctorate at TU Munich in 2001. Since 1993 he has been involved in research at TU Munich and MPA BAU, the accredited authority for testing construction materials and products, where he has been the head of the Structural Engineering Laboratory since 2001.

Dr.-Ing. Wolfgang Finckh studied civil engineering and gained his doctorate at TU Munich in 2012. He has been a chief design engineer at Wayss & Freytag Ingenieurbau AG (w&f) since 2012.