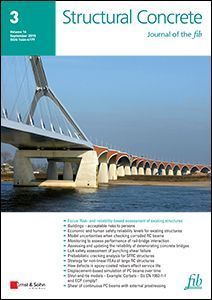 Cover Story: “De Oversteek” in Nijmegen is a new 1,400m long bridge crossing the Waal River. It consists of different sections that were built using different construction techniques and was opened for traffic in November 2013.

DSI supplied, installed, stressed and grouted the DYWIDAG Post-Tensioning Strand Tendons for all its transverse girders. As a rule, 5 Type 27-0.62′′, 1860N/mm² DYWIDAG Strand Tendons were used per transverse girder. In each construction cycle, the columns and V-girders were built prior to the construction of the concrete arches. DSI also supplied ∅63.5mm GEWI®Bars that were installed at the highest points of the concrete arch shells. The bar tendons ensure the stability of the arches during erection – particularly after the removal of scaffolding and formwork. (© DSI)