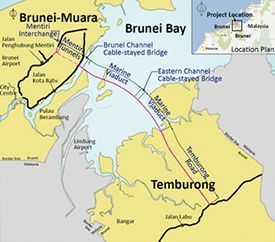 The Temburong Bridge Project is a 30 km long dual two-lane highway crossing over the Brunei Bay. It will connect the relatively isolated Brunei district of Temburong to the other three Brunei districts. The main objective of the project is to stimulate economic growth in the Temburong region by connecting it to the country's airport and ports. The alignment crosses two navigation channels resulting in the need for two cable stayed bridges - the Brunei Channel Bridge (145 m main span) and the Eastern Channel Bridge (260 m main span).