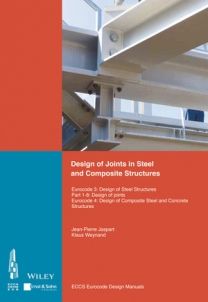 Design of Joints in Steel and Composite Structures

Jean-Pierre Jaspart is professor of steel and composite constructions at Liège University, in Belgium. He is also involved in other teaching activities throughout Europe, and in particular in an Erasmus Mundus project, SUSCOS, together with five other top-level European universities in the field of steel construction. He carries out research in the following topics: stability and resistance of steel and composite structures, connection design in steel and composite constructions, and robustness of structural systems. In 1992, he won the Magnel Award. He is a member of the Technical Committee ?Connections? (TC10) of the ECCS and was chairman for several years of its sub-committee TWG10.2 ?Joints?. Together with the second author and the late Martin Steenhuis, he drafted large parts of the initial version of Eurocode 3 Part 1-8 (the so-called Annex JJ) and is currently a member of Working Group CEN/TC 250/SC 3/WG 8 for the evolution of Eurocode 3 Part 1-8. He has authored over 260 publications, including 50 papers in international journals and 20 contributions to books.

Klaus Weynand worked for ten years at the Institute of Steel Construction at the Technical University of Aachen, Germany, as a researcher and teacher. He has been involved in many international research projects, his research mainly focusing on joints in steel structures. In 1999, he founded, together with Markus Feldmann in Aachen, his own design office Feldmann+Weynand, where he is still a partner and the managing director. Since 1992, Klaus Weynand has been a member of the Technical Committee ECCS TC 10 and, since 1997, a technical expert in the Technical Commission of CIDECT. He was involved in drafting the pre-version of Eurocode 3 Part 1-8, together with Jean-Pierre Jaspart, co-author of this book, and the late Martin Steenhuis from Delft. He has prepared papers for various international conferences and journals and has published books for practitioners (e.g. design tables for standardised joints). He is currently also a member of the German Mirror Group for Eurocode 3 and a member of the Working Group CEN/TC 250/SC 3/WG 8 for the evolution of Eurocode 3 Part 1-8.